Jimi Hendrix What Rock Music Could Be

Previous Next View All 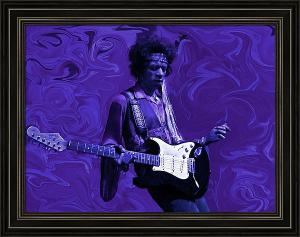 One of my best selling pieces – Why? Because so many folks love Jimi Hendrix.

I took this photo in New York and then placed the Psychedelic mood in the background.

When the power of love overcomes the love of power the world will know peace. – Jimi Hendrix


Jimi Hendrix exploded our idea of what rock music could be: He manipulated the guitar, the whammy bar, the studio and the stage. On songs like "Machine Gun" or "Voodoo Chile," his instrument is like a divining rod of the turbulent Sixties – you can hear the riots in the streets and napalm bombs dropping in his "Star-Spangled Banner."
His playing was effortless.

There's not one minute of his recorded career that feels like he's working hard at it – it feels like it's all flowing through him.

The most beautiful song of the Jimi Hendrix canon is "Little Wing." It's just this gorgeous song that, as a guitar player, you can study your whole life and not get down, never get inside it the way that he does. He seamlessly weaves chords and single-note runs together and uses chord voicings that don't appear in any music book. His riffs were a pre-metal funk bulldozer, and his lead lines were an electric LSD trip down to the crossroads, where he pimp-slapped the devil.

There are arguments about who was the first guitar player to use feedback. It doesn't really matter, because Hendrix used it better than anyone; he took what was to become Seventies funk and put it through a Marshall stack, in a way that nobody's done since.

It's impossible to think of what Jimi would be doing now; he seemed like a pretty mercurial character. Would he be an elder statesman of rock? Would he be Sir Jimi Hendrix? Or would he be doing some residency off the Vegas Strip?

The good news is his legacy is assured as the greatest guitar player of all time. By Tom Morello