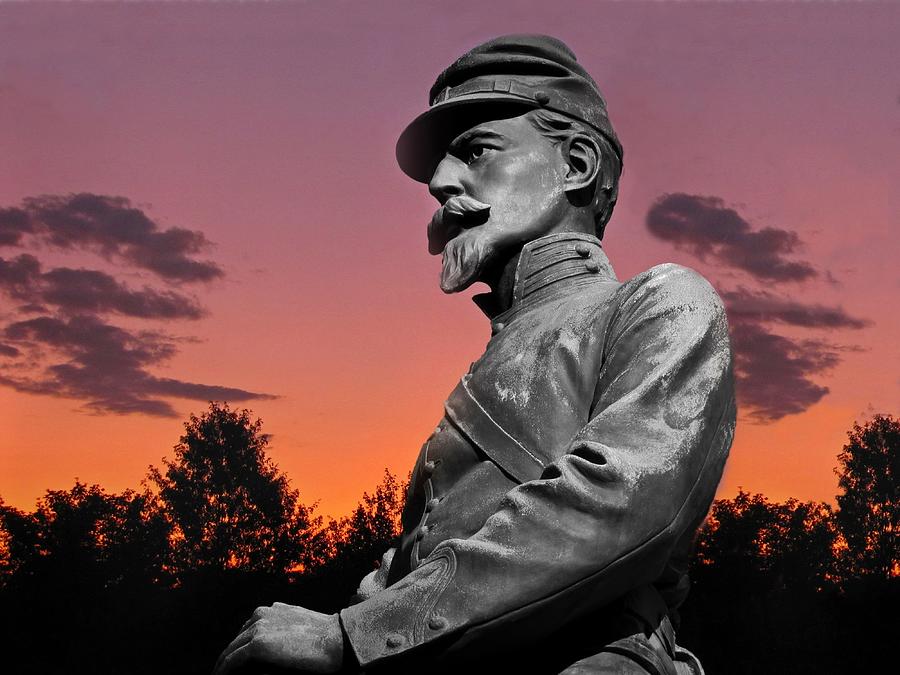 A bronze Civil War monument with a sunset in the background.


My version of this photograph is a soldier the evening of June 30 1863
Looking out over the valley of what was to be one of many battlefields the next morning
Elements of the two armies initially collided at Gettysburg on July 1, 1863.
Some estimates place between 46,000 and 51,000 soldiers from both armies as casualties in the three day battle. 7,863 were killed. 27,224 wounded and 11,199 captured or missing.

Beautifully done David. Don't suppose this is Joshua Chamberlain...looks a lot like him.

Thank you Linda for your kind comment - This monument did not include the name of the Calvary soldier - just the info included in my description - so he can be any one of a number of our heroes.

This is wonderful, I love the lighting and colors here

Thank you Shoal for your kind comments - Dave

Congratulations on your feature! Excellent artwork and composition! Fl

Thank you Gary for your congrats, comments and great support - Dave

Congratulations on your feature in the Fine Art America Group "Images That Excite You!"

Thank you Denise for your great comments, like and favorite - Dave

Thank you Vadim for your kind words and vote - Dave

Thank you Kathleen for your great comments and vote - Dave

such a great contrast. The sky is beautiful and the silhouette of the trees really pulls the photograph together. voted and favorite

Thank you K for your great comment and vote - Dave

David, Fantastic capture of this Civil War soldier on his horse, with that remarkable sky as the background to this already amazing detailed statue. You have managed to capture this bronze statue with all of its details and put it together with that awesome background that a lot of photographers would just give to have one of these two subjects. Excellent photo, voted, google, tweet and FB promoted

A deceptively serene image interrupted by the intensity of this soldier's stare and the bloodstained sky foretelling the events to come. An important piece of art beautifully done, David...V/F

Thank you Dawn for your great comment and vote - Dave

Thank you Eric for your kind words and vote - Dave

Thank you Lisa - I appreciate your great comment, vote and favorite - Dave

Very dramatic! It's as if the soldier could come to life at any moment. v/g+